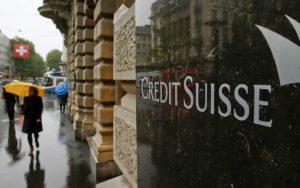 A manager at Perth Mint has grabbed the attention of Bitcoin advocates by circulating an alleged excerpt of a report by Credit Suisse where the banking giant notes support for cryptocurrency. The short statement asserts that the bank has begun to lose faith in the integrity of central banks, which thus opens the door to alternative forms of currency. BITCOIN AND CRYPTO GAINS FAVOUR The manager, Jordan Eliseo, does not provide a source for the excerpt. Nevertheless, his position at such an established financial institution gives a degree of credibility to his claim.  He has tweeted: Credit Suisse not mincing words pic.twitter.com/q9clQi5vq4 — Jordan Eliseo (@JordanEliseo) March 18, 2020 Notably, when referring to the current questionable behavior of central banks, the alleged report concludes: Therefore, attention starts to turn to alternative currency regimes, whether gold, or digital, or all of the above. The statement, if authentic, would be nothing short of remarkable, as it reflects the fact that the Swiss-based financial services company, one of the largest in the world, is preparing for a transition away from fiat currency on a global scale. Until now such major institutions have stalwartly stood behind central banks and the guidance they provide the global economy. A major bank making the $btc case. https://t.co/ozleOM31o8 — Michael Novogratz (@novogratz) March 18, 2020 The key point is the fact that Credit Suisse may have concluded that digital currency, which in this context must include blockchain-based cryptocurrencies like Bitcoin, is very likely to become mass adopted. More importantly, it would be on par with precious metals as a global asset reserve. Not surprisingly, many crypto advocates are now calling on Eliseo to prove the validity of the statement. He has yet to reply to their calls. BANKS MOVE INTO THE DIGITAL CURRENCY SPACE Regardless of the authenticity of the purported excerpt, the fact that legacy financial institutions are exploring cryptocurrency is well-known. They are now actively seeking to carve a place for themselves in the crypto space. JPMorgan’s proprietary stablecoin and Goldman Sachs’ acquisition of Poloniex are but two examples.  These moves are a stark contrast to the recent past when key players in global finance made no secret of their disdain of blockchain assets. Jamie Dimon’s now infamous rant against Bitcoin in 2017 was only one of many to come from a major banking figure. In fact, at the time Tidjane Thiam, CEO of Credit Suisse, called Bitcoin “the very definition of a bubble.” Nevertheless, until now evidence has yet to emerge that major banks have begun to lose faith in fiat. Any indication that they would recognize the legitimacy of cryptocurrency has been quickly followed by clear support for fiat as the foundation of global finance. Should their position on this key issue shift the global impact would be nothing short of revolutionary. What do you make of Credit Suisse’s latest statements on digital currency? Add your thoughts below! Images via Shutterstock, Twitter @JordanEliseo @novogratz

EOS is ‘Like a Feudal Kingdom with Indentured Servants,’ Says Weiss Ratings