Bitcoin (BTC) and Ethereum (ETH) are still rallying since the prices of the digital assets crossed over into pre-FTX crash levels. They continue to see green movements in the market, posting gains at this time, but this may not continue for long.

Bitcoin And Ethereum Are Being Dumped

In a post shared by Santiment on Twitter, the on-chain data aggregator revealed that there was massive profit-taking happening across the two largest cryptocurrencies in the market. Given that both assets have seen massive gains since January began, this is understandable as investors would want to take profit off the top of their investments, but it could also spell bearish sentiment for them.

According to the chart Santiment shared, the level of profit-taking being recorded across Bitcoin and Ethereum has surged to 2021 levels. 2021 was the year when the bull run was at its peak, triggering massive profit-taking. 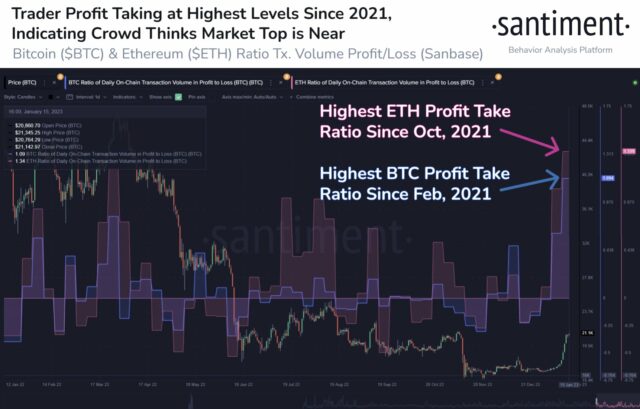 As the chart above shows, Bitcoin’s profit-taking rose to February 2021 levels, while Ethereum surged higher to October 2021 levels, just before the digital asset had hit its all-time high price of $4,800. This could have severe implications for the current mini-bull run being experienced.

How Could This Affect The Crypto Market?

As Santiment points out, the amount of profit-taking happening could point to a belief among investors that the rally will not last. If holders are choosing to sell, then they probably want to take out profit before what they believe would be an inevitable downturn.

If they are right and the top of the current rally has been marked, then it could mean the downward correction comes out lower than expected. Bitcoin will likely fall below $20,000 in that scenario and Ethereum would lose its footing above $1,500 once more.

As with previous times when profit-taking has been this high, the prices of Bitcoin and Ethereum are expected to fall in tandem. And if history is anything to go by, such a drastic fall from current prices could put both digital assets at prices well below their cycle lows. Furthermore, it would mean that the bottom has not been reached, unlike what many in the space believe.

If Jennifer Lopez Has a Secret Stalker, the Prime Suspect Will Shock You